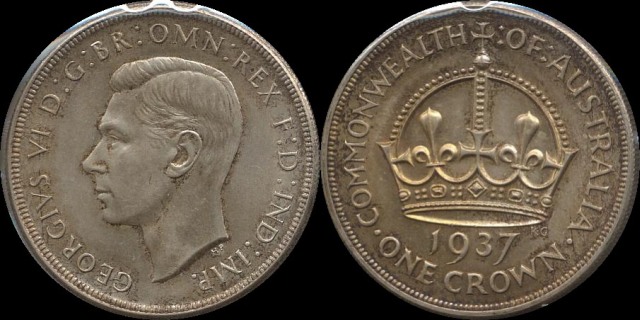 When Australia adopted it’s own coinage in 1910/1911 the decision was made not to include some of the denominations used in Great Britain. One of these was the crown or five shillings. However in 1937 to mark the coronation of King George VI it was decided to mint a crown sized silver coin for circulation in Australia. The obverse bore the normal Paget portrait of George VI while the reverse was designed by George Kruger Gray.  The coin was minted both as a commemorative coin and as an experiment to see if the coin would be useful to the Australian public.  The Sydney Morning Herald of 22 June 1938 said of the crown:

This large coin weighed in at 28.27 grams (5 times the mass of a shilling) and measured 38.5mm in diameter. When it was released in 1937 it was instantly unpopular with the public due to it’s size and quickly became known as “Casey’s Cartwheel”. This rather derogatory name was a poke at both the size of the coin and at the Australian treasurer at the time of it’s introduction, Richard Casey. Just 1,008,000 were minted for 1937 and because it was so unpopular just 101,600 1938 crowns were released into circulation. The rumour is that many more 1938 crowns were minted but rather than being released into circulation but they were sold to China where in 1948 they were re-minted as Chinese (Sun Yat-Sen) dollars.