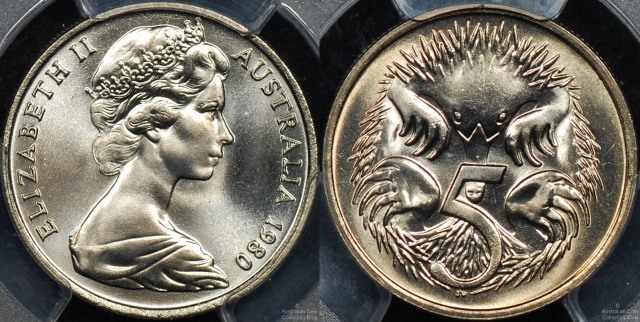 The Australian 5c coin is a small copper nickel (75% copper, 25%) nickel that has been produced for circulation since 1966.  It weighs 2.83 grams and since it’s introduction the obverse has included a depiction of Queen Elizabeth II.  The reverse has always depicted an Echidna as originally designed by Stuart Devlin.

There are no particularly difficult five cent dates to find for the collector. The 1972 five cent is considered the “key date” but even that can still be found in circulation condition in pocket change and can be bought in gem condition for well under $100. Some years (such as 1985 and 1986) are only available from mint sets but many of these sets have been broken up and individual coins are often available for sale via online auction sites.