In the year 2000 the Royal Australian Mint released a commemorative 50 cent coin to celebrate the new millennium.  The so called “2000 Millennium 50c” shows the usual Ian Rank-Broadley portrait of Queen Elizabeth II while the reverse shows a stylised Australian flag with the usual Union Jack in the top left corner.

Some time after release it was noticed by some collectors that the flag on some coins was slightly different to that on others.  On the normal design the central cross of the Union Jack (the cross of Saint Andrew) was in relief (that is it projected out from the surface of the coin).  On the less common variety the cross was incuse (that is sunk into the surface of the coin).  There’s also a difference in the Federation Star on both types.  The Federation Star is the large seven pointed star under the Union Jack on the flag.  On the normal variety of the Australian 2000 Millennium fifty cent the surface of the star is noticeably rougher than that on the incuse flag 50 cent.

Information from the Royal Australian Mint is that they produced one incuse die which was intended for coins used in Mint Sets. This decision was later overturned and a single die pair production run sent approximately 200,000 coins into circulation .

When Was the Incuse Millennium First Discovered?

Currently the first known reference to this variety is in the 14th Edition of the Pocket Guide to Australian Coins and Banknotes. This is the 2007 edition. Given that printing of the Pocket Guides happens late in the preceding year (2006) and allowing for printing deadlines it’s reasonable to assume that the author of the guide was made aware of the variety in mid 2006. This is confirmed by a former member of the defunct Australian Coin and Banknotes (ACBO) internet forum who has said this:

At the time of writing (November 2013) average circulated examples of this unusual variety fetch $20-$30 on the open market.  Uncirculated incuse millenniums are rare and would be worth multiple hundreds of dollars -if you can find one! There is a lot of interest among collectors to pick up an unc or better one of these for their collections and there aren’t enough for that demand. PCGS recognised the variety (coin number 525195) in March 2014 and slabbed the first example noted correctly as such (an MS62 PCGS Certificate). Another coin (an MS63) appeared on the PCGS population reports very soon after. In February 2014 a PCGS AU58 incuse millennium 50 cent (not noted correctly on the PCGS holder) sold privately for AU$700-$800 (exact price unknown). The PCGS MS62 graded example sold on 20 April 2014 for $1155. The PCGS MS63 graded example appeared for sale on Drake Sterling Numismatics and sold immediately for $1,750. On 22 July 2014 PCGS graded incuse millenium 50 cent coins in AU55 and AU53 appeared for sale on the Drake Sterling Numismatics for $195 and $95 respectively. 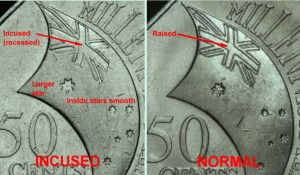